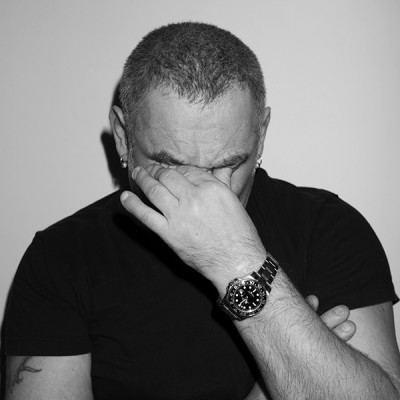 Antonio Ferrari, aka Dj Ralf, was born in Italy in 1957, and has been a nightclubbing icon since 1987. His skill comes from the inspiration he found in rock music and from the years he spent behind the decks as a DJ in his hometown of Perugia, where he was known as “ Lacugnana “, “ Story Teller “ and “ Norman the President.“

He played at innovative clubs in which he was able to freely mix different genres together and appeal to a large cross section of people. The sets he played at clubs in Perugia represent the first major step of his artistic and musical development. Club culture was vital in the late ‘80s, and Perugia had an intense nightclub scene, in part thanks to the students who attended the city’s university.

In 1987 Antonio Ferrari decided to take a trip to New York City, in order to experience the rich culture of fashion, music and art that the city was, and is, renowned for. In ’87 New York was reeling from the twin effects of hip-hop and house (or garage as some heads in New York and New Jersey like to call it) and the music coming out of the city was impacting the entire globe. This visit to the Big Apple proved to be the second significant step in Antonio’s career. The music in NY’s clubs inspired him to start a party back home that was primarily focused on the innovative house music coming out of his native Italy.

Since then he has remained a key element of the I

He has been featured in publications such as, DJ Magazine, Rolling Stone, The Mucchio Selvaggio, Playboy, Time Out, GQ, Vanity Fair, and Vogue, to name few. In 2006 he started his label, Laterra Recordings. The first release. “I’ve Done It,” was produced with his friend, Tenax resident, Alex Neri, and Marco Baroni. Other Laterra projects include, “What I Want / B*tch” by Kradda aka Italian DJ legend Ricky Montanari and partner Lele Pasini, “Tunguska” / “Toys” by Federico Locchi & Frankie Watch, and “Chimera” / “Cassero” by Luca Agnelli And Etruria.

In June 2010 and 2011 during SONAR, the label took part in an Italian label showcase, “Who Is In Who Is Out” at the Mon Key Club in Hotel Omm.
During the summer of 2007, from July 10th till September 11th DJ Ralf presented his own club night, ‘Alma’ at Privilege in Ibiza. He shaped the musical identity of the party and played alongside prolific DJs like Steve Bug, Timo Maas, Mathew Johnson, and Ellen Allien. Though he has been busy with many commitments, including clubs nights around Italy and Europe, he also presents a party, Bellaciao that takes place on two Sundays of the month at Urban Club in his hometown of Perugia. Bellaciao has been a great success for the last five years and has now become a regular event. The party, which is on a Monday night, sends Perugia into a state of frenzy with people coming from all over Italy to experience the flawless selection of music that Ralf presides over. In true old school style there is no PR, there are no vocalists, and the DJs are all Italian, famous and emerging, and all carefully and personally chosen by Ralf.

For Ralf music elevates the spirit and releases nervous tension. It is an indispensable part of his daily life, and an inspiration for those who are fortunate enough to attend his parties and hear his excellent sets.